Campaign "WE WANT TO LIVE!

at the San Andrés and Paracas fishing communities" 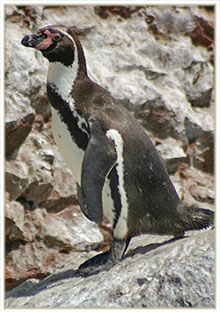 ACOREMA carries out several initiatives for mitigation of threats faced by the Humboldt penguin (Spheniscus humboldti). One of these is the campaign “We Want to Live! for Humboldt penguin conservation at the San Andrés and Paracas Fishing Communities”, aimed to motivate the public to participate and make sustainable the conservation efforts for this threatened species.

The bases of the campaign are the studies on the Humboldt penguin population trends, information on interactions with fisheries –in particular the small scale fishery- and other identified threats to Humboldt penguin.

In this stage of the campaign several publics are participating in both San Andrés and Paracas.

The campaign in action

Lectures and informal talks are directed to fishermen using a diversity of fishing gear at San Andrés and Paracas. The objective is to let them known about important aspects of Humboldt penguin biology and conservation, encouraging their participation and even proposing alternatives to mitigate some of the threats generated by their activity.

Also, awareness activities on Humboldt penguin are organized at the San Andrés and Paracas schools, including lectures to both primary and secondary levels. The objective of this action is to improve and reinforce the knowledge on the species managed by the students, as many of them go out with their parents to participate in fishing operations that may be potential sources of threats to the penguins. Initiatives proposed by the students and teachers are oriented and supported, in particular those having an awareness component on Humboldt penguin oriented to the whole community that can involve more people in the process.

Another important element is the development of puppet shows performed at schools and public areas. This activity is organized together with the Paracas National Reserve. Along with the distribution of informative materials, the puppet shows allow reaching all publics with messages to motivate participation of several community groups in the mitigation of threats affecting Humboldt penguins in the area.